Currently, corruption of the Ukrainian system remains of the sharpest issues. Although President Zelensky recently stated in an interview with the international press that corruption in Ukraine is not the most urgent issue, in reality things look different.

One of the most high-profile cases of illegal money withdrawal and stealing from investors is the case of Andriy Huta. The case of the “MRIYA” agricultural holding company. The issue is so burning, that an international investigation into the new details of this case, published on the third day of the war – 26th February, not drew attention, but led to a series of international statements.

As Andriy Huta continues to hide in Switzerland, this issue can lead to negative consequences for Ukraine’s reputation in Switzerland altogether.

This story was repeatedly mentioned in Ukrainian sources, although the focus was always on the head of the family, Ivan Huta. We cannot judge whether this was a deliberate displacement or an accident. However, the latest published materials show that it was the son of the head of the corporation, Andriy Huta, who had the greatest influence on decision-making over the last ten years.

We are not going to dive into the prehistory of “Mriya’s” bankruptcy – let’s just say that the Huta’s managed one of the largest grain productions in Ukraine, but soon it went bankrupt. As a result, as of today, Andriy Huta’s company owes various investors more than a billion dollars in total.

In 2002, sons Andriy and Mykolay joined the business of Ivan Huta (the founder of the company). Although Andriy Huta’s linkedin profile states, that he has been a co-founder since 1999. In 2008, Mykolay became the CEO of the holding and ran “Mriya”. Andriy was appointed executive director by his father.

However, it was from the moment when Andriy Huta joined “Mriya” that, according to eyewitnesses, when the toughest period of the company’s “growth” began. In fact, there were raider seizures of lands and enterprises that people were afraid to talk about. Whereas the PR department of the company actively worked on creating the image of a “socially responsible company”.

As a result of these “deals” during 2012, with the efforts of the young but promising Andriy Huta, the company conducts not entirely transparent transactions at inflated prices and, according to their own internal reports, becomes the country’s largest agricultural holding. With these inflated figures, the company enters the international stock exchanges. In April 2013, various rating agencies paid attention to the rapid growth of the company, which seemed suspicious, but investors continued to bring money to Andriy Huta and the company.

Over these few years, Andriy Huta, using connections acquired during the years of his education in Europe, as well as those, acquired through the investment company UANGELS, was able to attract major investors to his father’s company, immediately withdrawing that money.

According to preliminary data, the investigation revealed that from October 2011 to December 2013, the company paid more than $100 million for the shares of eight Cypriot companies, with the total value of their assets amounting to about $12,000.

“Mriya” transferred funds to eight companies in the British Virgin Islands – each owned shares in Cypriot firms. According to court documents, Huta’s owned all eight companies registered there. In most cases, these companies did not even transfer shares to “Mriya”.

At the peak of its “dawn,” it all collapsed.

A debt of $1.3 billion was hanging over the holding. There was no money to pay it back with, and most importantly, there was no one to pay it: the founder of the company disappeared with considerable amounts of money.

Later, it turned out that not only the land bank and productivity were fabricated in the statements, but also the financial results of individual companies of the holding. Regarding “Mriya”, a liquidation process was launched in Cyprus, where it was registered.

Later, it turned out that Andriy Huta had withdrawn huge sums from “Mriya” and transferred them to the accounts of his offshore companies. Two of them were used to buy a luxurious villa in the mountains of Bavaria. Afterwards, the villa was called the most expensive on the German market.

The authors of the project “Secrets of Credit Suisse” found out that the funds were sent from the account in the bank Credit Suisse. The transaction should have drawn the attention of regulators, experts say, according to OCCRP.

Suisse Secrets data shows that 13 corporate and 3 personal accounts, opened at Credit Suisse between November 2008 and December 2013, were signed under Andriy Huta’s leadership.

The “Mriya” corporate account with the largest balance (222.9 million Swiss francs, or about $243 million) was used on five occasions to buy shares of bubble Cyprus companies.

In an arbitration document obtained by OCCRP, liquidator Chris Yakovides stated that Huta used the “Mriya” account at Credit Suisse only for transferring money from one account to another. Around Dec. 19, 2011, for example, $37.9 million was deposited into the account. A few days later, $21 million was paid to two companies in the British Virgin Islands owned by Huta. A similar pattern occurred two years later, when in December 2013 the account received $7.9 million in one day, and then quickly transferred $8 million in two payments to a front company, owned by Andriy Huta in the British Virgin Islands.

In total, for the reporting period, the situation looked like this: 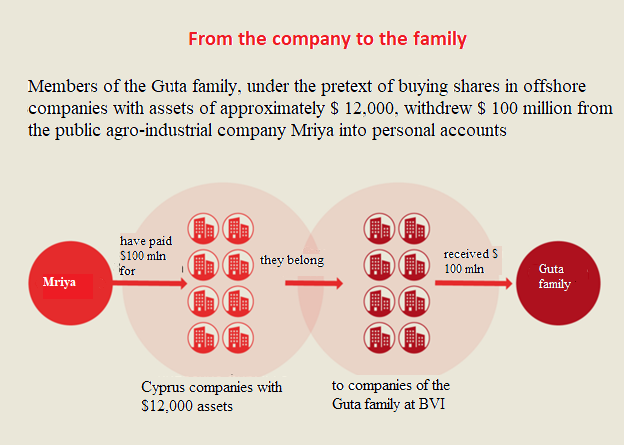 In 2018, the liquidators, on behalf of Mriya’s creditors, sued Andriy Huta, demanding over $100 million in compensation.

But the most interesting in this story is that the money was mainly withdrawn through companies registered specifically in the name of Andriy Huta, but his name is not in the criminal proceedings either in Ukraine or abroad. He is the only family member, who somehow turned out to be as clean as a whistle. Moreover, he continues to manage the long-suffering holding indirectly, through LLC “UKRAINIAN MRIYA”, LLC “FG SciTech-Production Association MRIYA” and an offshore company with jurisdiction in the UAE “YERIEL LIMITED”.

Thus, in 2018 in fact there was a fictitious sale of “Mriya”, already the bankrupt and cleaned out by Andriy Huta, to the Arab company SALIC. Allegedly, SALIC is an international major company with an excellent reputation. Thought, according to Panama pappers data, the owner is still Andriy Huta. The thing is that the same SALIC has several subsidiaries. One of them is SALIC INC, whose agent is Mossack Fonseca. What’s more, Andriy Huta’s company YERIEL LIMITED has the same agent, Mossack Fonseca. This gives every reason to assume, that after the bankruptcy, there was a fictitious sale deal with the Arabs.

In other words, Andriy Huta withdrew a billion in cash, the debts were paid by the restructurers, and the company remained in the family through the efforts of the younger Huta. 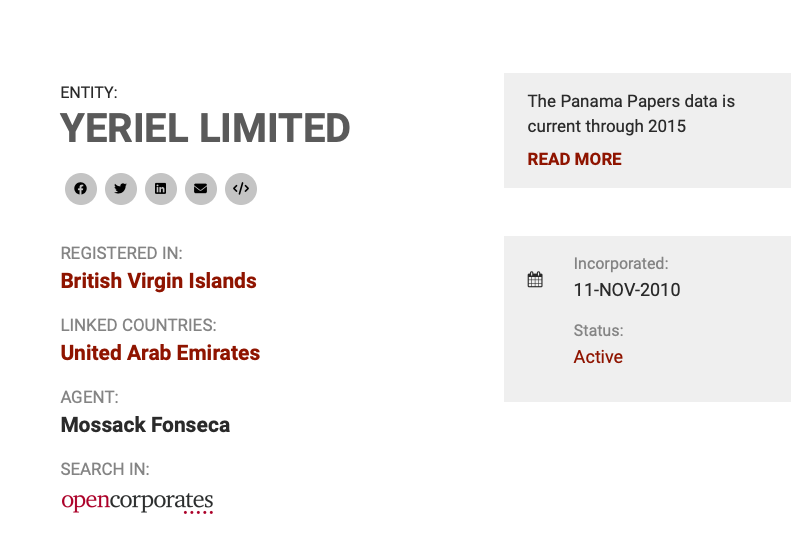 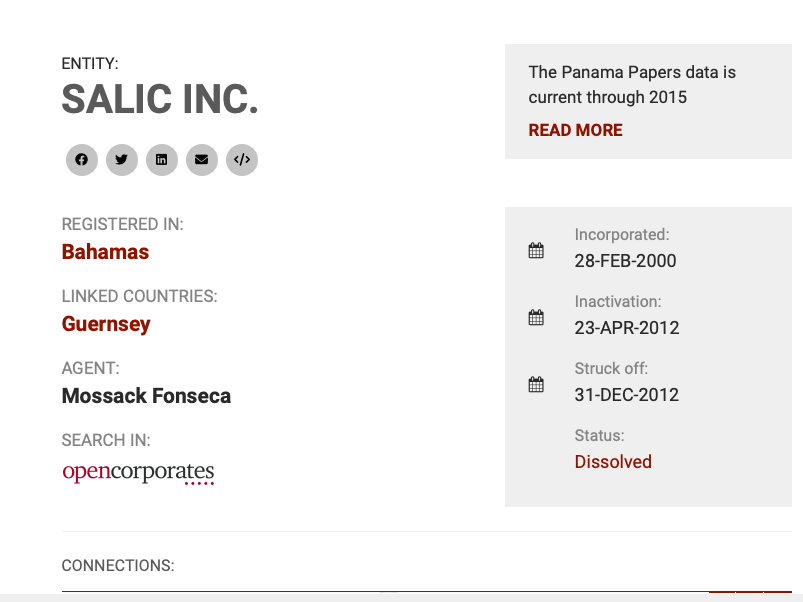 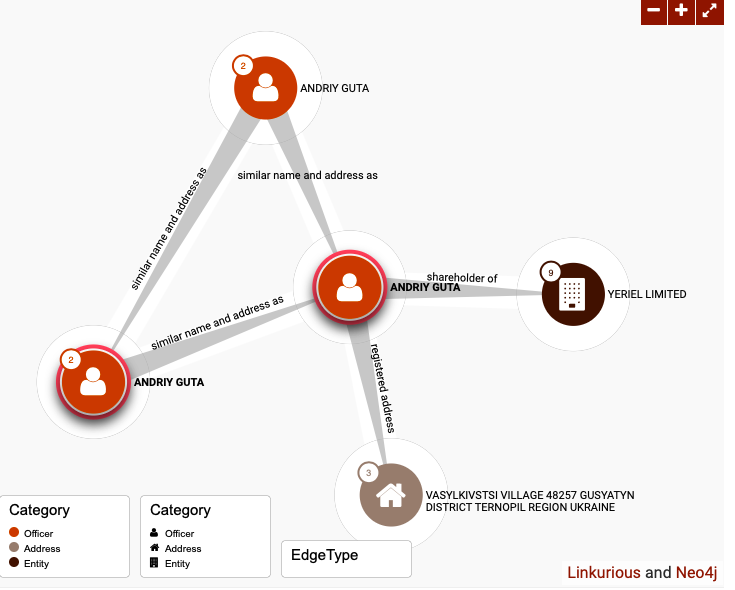 Despite the long list of alleged crimes, Huta has been living in Switzerland since the bankruptcy of “Mriya”.

Furthermore, Andriy Huta, who most likely was the main initiator of these machinations, not only continues to live on the shores of Lake Geneva, but is also actively engaged in startups in Switzerland. His personal accounts have not been arrested, and his activities remain extremely energetic.

In 2019, Cyprus issued European arrest warrants for Andriy Huta, and in 2020 a “red circular” was issued by Interpol, but the Swiss authorities have not yet approved the extradition request.

At the same time, the case of one of the biggest scams on the Eastern European market remains open. It is precisely for Switzerland that it is now of great importance. After all, the war in Ukraine has forced the authorities of this country for the first time in history to abandon its neutral position, and this is a fundamental breakthrough: money is no longer the main priority. Humanity and common sense prevailed, so now, with the assistance of the Ukrainian side, the issue of the extradition of the young talent Andriy Huta may be reconsidered.