Home News Business Credit Suisse declared guilty in AML case, got away with rather symbolic fine

According to the judge, Credit Suisse did not do enough to prevent a rogue client from laundering large amounts of money. The bank must therefore pay a fine of 2 million Swiss francs .

It is a case in which Bulgarian cocaine traders funneled their profits through Credit Suisse between 2004 and 2008. According to the judge, the bank should have done more to prevent this. A former employee of the bank was tried separately and was also found guilty.

The judge, in addition to the fine, also decided to seize 12 million francs in assets. The employee was also fined and given a suspended sentence of twenty months.

It is the first criminal case against a Swiss bank. Credit Suisse is the second bank in the country. The economy leans to a significant extent on the financial sector.

Both the employee and the bank deny that they made mistakes. Credit Suisse has already announced that it will appeal the ruling.

Recently, the Swiss bank has been under fire more often. Earlier this year, leaked data revealed that Credit Suisse customers have been involved in torture, drug trafficking and corruption. It would be the period from the Forties of the last century to several years ago.

Last year, an investigation was also launched into debacles involving investment company Archegos and financier Greensill. Credit Suisse would have lost billions in the process, which prompted Swiss politics to look at what went wrong and whether supervision of the bank should be tightened.

WhiteBIT CEO, Volodymyr Nosov, explained why the traditional world eventually will have to seek ways to coexist with the digital one 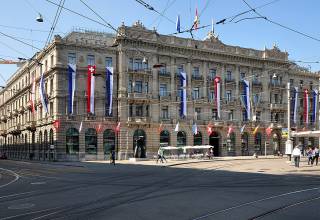 According to the judge, Credit Suisse did not do enough to prevent a rogue …