Ablay Myrzakhmetov, the Chairman of National Chamber of entrepreneurs of Kazakhstan is well-known among the international community. As a chairman of the influential «Atameken» organization he often serves as middleman bridging foreign business and Kazakhstan’s complex and non-transparent regime. In a local autocratic inferno he manages to combine the characters of both Virgil and Charon, being a guide in a world of clans – for a fee. We bet that any major international investor in Kazakhstan met Ablay Myrzakhmetov in person and had to do business with him. 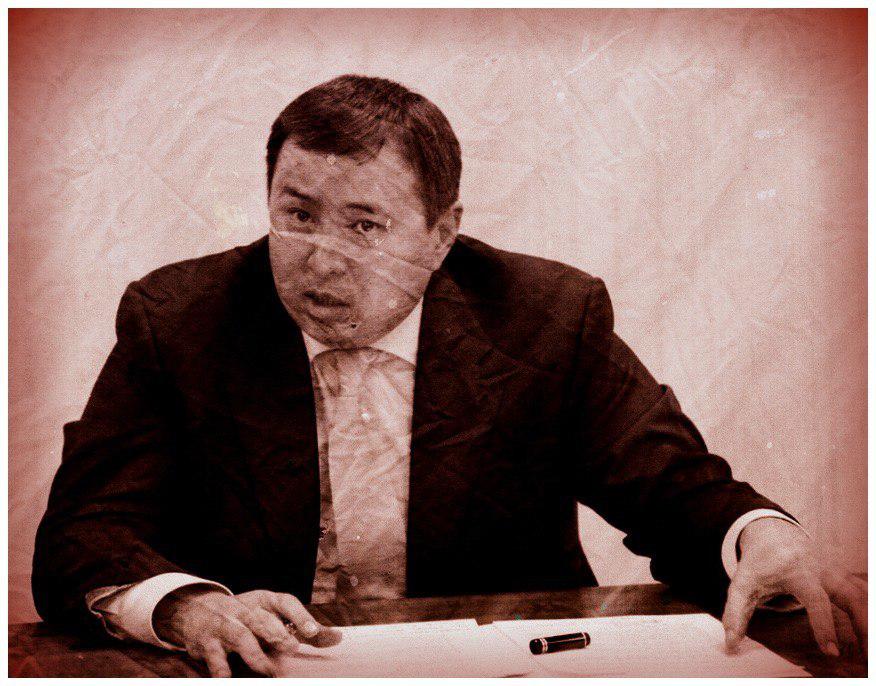 There are at least two episodes in the CV that Ablay Myrzakhmetov tries to keep in the dark. It is not a secret for locals though. While being CEO of the national railway corporation, Kazakhstan Railways, back in 1997 he defrauded the government for something around twenty millions USD. He was accused and subsequently convicted in 2002. Right from the chair of the minister of transportation he landed on the dock. There was dozens of criminal cases and at least five proven indictments. Prosecution asked for ten years of imprisonment for the mastermind of the gang – Myrzakhmetov himself. Nine managers of the Kazakhstan Railways got jail terms. And only one – the gang leader – got five years of probation.

Look at a neatly redacted biography from the Roscongess site:

In attempt to hide his conviction from the public he wiped out the data from Wikipedia which can be noticed by looking into history of edits. Here is a redacted version, and here is original.

The Kazakhstan establishment exercised a rare condescension. Despite the humiliating criminal conviction Ablay Myrzakhmetov was not expelled from the highest ranks of the bureaucracy united by the Nur Otan ruling party. He reemerged nine years later as a Chairman of the «Atameken», a sort of nationwide trade council – a semi-governmental rich and powerful body that has some weight in the decision-making process. «Atameken’s» opinion is considered when launching new taxes, tariffs and regulations. As a proxy of the Timur Kulibaev, he is in direct contact with Nazarbaev clan. He trades his extensive ties in exchange of shares and other values. In fact, Timur Kulibaev remains Ablay Myrzakhmetov’s main patron. Kulibaev not only manages his relations inside Kazakhstan but supports him outside the country. China and Russia, EU and USA do their best not to deal with convicted corrupted ex-minister. Only Kulibaev ties are keeping Myrzhakhmetov afloat.

Ablay Myrzakhmetov is in control of some lucrative but shady Kazakhstan assets. It was revealed that he owns one of the country’s major distilleries – Geom-Wimpex which is known for the vodka brands. Only half of the vodka in Kazakhstan is legal. Counterfeit vodka is produced by the same plants but evades taxation and therefore is cheaper than usual. There is an extensive network of smugglers who sell the local vodka to Russia. Smuggling is also reportedly controlled by Ablay Myrzakhmetov.

Myrzakhmetov does not hesitate to silence his critics and tries to contain any leaks related to his involvement in Wimpex operations and previous conviction. Recently he ordered the nation-wide ban of the RegisterTV site which revealed the link between him and the local vodka manufacturer. The site was rendered inaccessible in Kazakhstan in just one day after publishing of the article about Myrzakhmetov involvement in the business. It was announced on a Facebook page that «Atameken» ordered the blocking of critical media. Kazakhstan has a long history of suppressing of critical journalism and opposition figures.

In the case of RegisterTV events unfolded as follows: 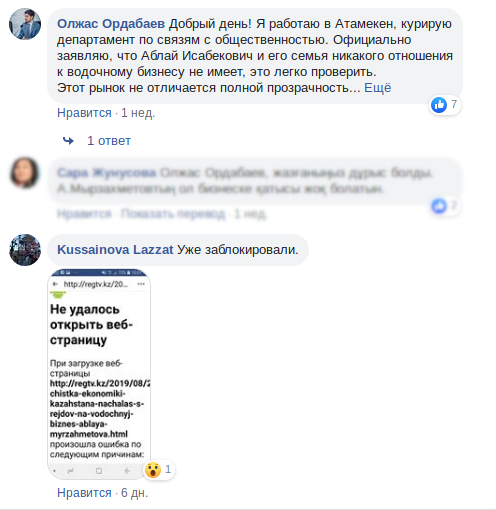 One of the PR officers of «Atameken», Olzhas Ordabaev, denies that Ablay Myrzhakhmetov is involved in selling vodka and threats that those who will spread the «false» information will be punished. He also threats RegisterTV with severe measures. It should be noted that Olzhas Ordabaev as a PR representative of «Atameken» was not into position to comment on the topic, however he chose to take a stance on behalf of his superior. Soon after it Kussainova Lazzat reports that the site has been taken down. Ablay Myrzakhmetov has silenced yet another voice exactly the same way he wiped Wikipedia and Roscongress before. Myrzakhmetov was unable to block the silenced RegisterTV website alone. It is more than likely that he used a helping hand of his patron, Timur Kulibaev, to deal with a critical website.