Home News Business Rough Political Business as it was

On the evening of 8 November, the world gathered in front of TV screens for the news. In the early hours of 9 November, it began to dawn on us that what we were watching was no longer news but history. Not since 9/11 could many recall such a sense of incredulous dread, and as Florida fell to Donald Trump, I found myself seized by an eerie premonition. I saw schoolchildren turning over history examination papers in the future, to find a question as predictable and familiar to their generation as one about the origins of the second world war had been to mine: “Identify and analyse the parallels,” it would read, “between the 1930s and the 2010s.”

No one yet knows how 2016 will be remembered, and if Boris Johnson turns out to be right, we will wonder why anyone ever worried about the arrival of another “liberal guy from New York” in the White House. If, however, pupils do one day have to answer that exam question, they might well begin by observing that we were every bit as slow as our forefathers to recognise impending catastrophe.

When David Cameron returned from Brussels in February, brandishing his peace-in-our-time renegotiated EU membership terms – can anyone now even remember what they were? – it looked as if the referendum promised nothing more sinister than the entertaining spectacle of the government tearing itself apart. No one was surprised to see Iain Duncan Smith, Chris Grayling, John Whittingdale and Theresa Villiers side with Vote Leave, but Michael Gove’s defection was a bombshell. When Johnson followed a day later, “after a huge amount of heartache”, the audacity of the pretence that he was acting on deeply held anti-EU conviction fooled nobody. As the columnist Nick Cohen put it after the vote, “There are liars, and then there’s Boris.”

In Hong Kong, on Friday morning, a raid took place on copies of the pro-democratic newspap… 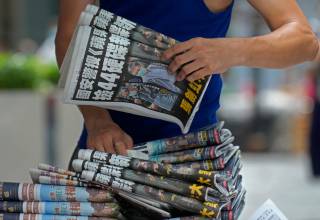 In Hong Kong, on Friday morning, a raid took place on copies of the …