The “solarization” of 40 percent of the existing roof areas would be sufficient to achieve this goal. But where the Swiss solar panel market had a record year in 2021, there are also problems, such as a severe staff shortage.

The Swiss Federal Energy Agency SFOE reports that despite this, all market segments have grown in the past calendar year. The installation of systems on industrial and commercial buildings grew by 53 percent and on single-family homes by 60 percent. A new pv installation averaged a 25.3 kilowatt peak in 2021, compared to a 24.5 kilowatt peak a year earlier.

‘It has never been so obvious to install a pv system: it supplies the electricity for electric cars and heat pumps, contributes to the security of supply and protects against record-high electricity prices, ” summarizes David Stickelberger – director of Industry Association Swissolar – the reasons for the installation boom .

At the end of last year, the country had 3,655 megawatt-hours of peak solar panels; accounting for an annual production of 2,842 gigawatt-hours of solar energy. According to SFOE, this corresponds to the consumption of 900,000 four-person households. The share of solar energy in electricity production was 4.89 percent at the end of last year and would now even be around 6 percent.

The rapid growth after 2010, caused by the cost-covering return fee,. In 2016 and 2017, only small systems were financed, while the Swiss ‘Energy Strategy 2050’ came into force in 2018 and, together with the high energy prices, has caused the market to explode.

As far as Swissolar is concerned, annual sales should grow to a peak of around 2 gigawatts per year. For this year, an installation volume of 850 to 900 megawatts peak is expected; in other words, growth of 25 to 30 percent.

But not only solar panels are now eagerly being sold in Switzerland. Batteries are also hot. On average, 1 in 3 Swiss who provide their home with solar panels choose a home battery. The total installed storage capacity was 157,000 kilowatt hours at the end of last year.

Swiss industrial companies think about shifting work to nights and on weekends. It may hel… 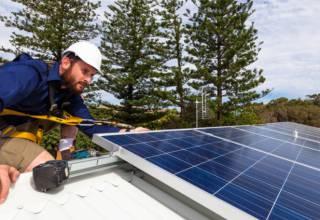