Home News Business Swiss economy is performing better than of other European countries: what is the recipe?

The Swiss franc has been a safe haven for a long time in the face of growing unrest in the financial world. There is now also an interest rate advantage on top of that. But then why doesn’t the coin fly up much faster?

Switzerland has many things that you can look at with envy as a Belgian or Dutch. Beautiful mountains, delicious chocolate and even an almost sacred bank secret until a few years ago. Although the latter is now a thing of the past, modest inflation and a decisive central bank can be added to that list.

While inflation in Belgium is close to 9 percent, in the Alpine country it is below 3 percent. Those reasons were already a good topic for a column at the beginning of April. For those who do not feel like looking for it back, here is the list in short: thanks to nuclear power plants and hydropower, the country does not suffer from higher energy prices, forced premium reductions from health insurers and an expensive franc.

That frank also received a strong push from the Swiss central bank a week ago bank. As a surprise move, the Swiss National Bank (SNB) raised the policy rate for the first time in fifteen years. Not only the moment of the adjustment was unexpected, but also its magnitude. While the European Central Bank (ECB) seems to be preparing very cautiously for an increase of a quarter of a percent, interest rates in Switzerland have risen by as much as half a percent.

The SNB even hinted at even more interest rate increases in the coming months. That is quite a change of course. Until recently, the Central bank of Switzerland was Japan was the only country in the world that did not raise interest rates.

An increasing interest rate usually makes it more attractive to acquire capital hold it in a certain currency. Although the current rate of -0.25 percent still leaves few parties pushing for this, it does lower the threshold for those who want to switch to the Swiss franc out of uncertainty about the financial climate.

The currency is considered a safe haven thanks to a strong banking sector, a domestic economy that is not easily disrupted by external factors and a prudent central bank. These characteristics are a major reason why the franc has risen by almost 10 percent against the euro since September last year. Although in theory the Franks continue to hold the wind in their backs, the practice looks different.
Granite or paper border?

As soon as the limit of 1 euro threatens to be broken, the SNB hits the brakes hard. The central bank strives for predictability in this regard and wants to prevent the international the competitiveness of Swiss industry is being eroded. Last year’s intervention costs
the SNB foreign exchange market is worth 21.1 billion francs. And in Corona year 2020, that was even 110 billion francs. Is there a limit to what the bank can do to defend the 1 euro limit? Certainly, because in in January 2015, the limit of 1.20 euros was unexpectedly released. However, the surprising interest rate increase underlines that the SNB is not looking in the cards. So for now, it makes little sense to bet on a higher franc already. 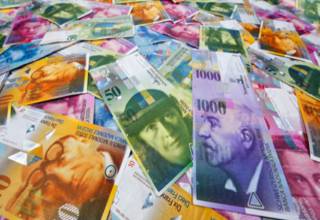