The homes, about the size of a bird nesting box, can be mounted on the wall of a home or on an apartment balcony.

Wildbiene + Partner mails them to customers via Swiss Post, along with 15 non-stinging bees still in their cocoons.

In the spring when the weather warms up, the bees, a mixture of males and females, are ready to pollinate — and to breed.

In the autumn when the baby bees are hibernating, bee home owners send them back by post to Wildbiene + Partner in a removable compartment.

“With the returned bees we give them to farmers to pollinate their orchards,” company representative Martin Ruetz told The Local. 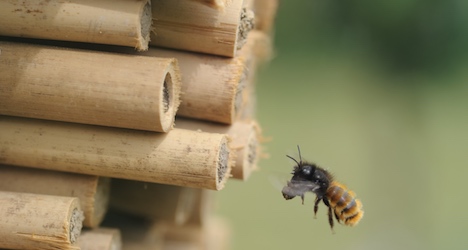 Staff clean out the compartment that houses the bees and mail it back with a new batch of 15 cocooning bees early the next year, Ruetz said.

Typically owners of bee homes can expect to see their bee population increase three- or four-fold, he said.

The idea of the company is to boost Switzerland’s bee population and to help pollinate trees and other plants that provide fruit, nuts, herbs and vegetables, a service that farmers are willing to pay for.

“A third of Switzerland’s bee population dies every year and a third of our food depends on pollination,” Ruetz said.

Wildbiene + Partner was started as a spinoff from the Swiss Federal Institute of Technology in Zurich (ETH) by two biologists, Claudio Sedivy and Thomas Strobl, less than three years ago.

Of the more than 600 species of wild bees in Switzerland, the company decided to use mason bees, also known in North America as blue orchard bees, because they like to pollinate fruit trees.

“They are solitary bees, they don’t live in a hive with a queen,” Ruetz said.

“They are very efficient in pollination and they don’t fly that far . . . they are harmless, don’t sting and some people even treat them like pets.” 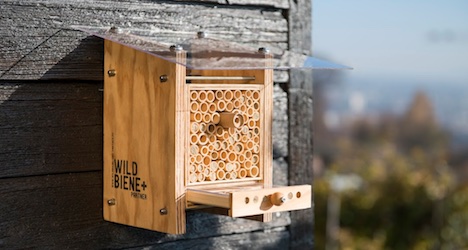 The homes can be installed outside apartments in Swiss cities, where the bees are able to find flowers to pollinate, as well as outside villas.

The insects make nests in the bamboo tubes provided with the kits.

One of the benefits that bee home buyers provide is by increasing the diversity of breeding locations, which could improve their breeding success.

There are two models of homes, the “classic” for 120 francs ($121) and an “observer” model with a pull-out draw for 175 francs that lets you see the bees develop and build their nests.

In another interesting twist to the business, the wood structures are put together by a group of 30 to 40 disabled people through a partnership with social institutions.

After the first year of home ownership, the company annually provides a batch of new bees for free and cleans out the compartment, with the owner paying only for mailing costs.

The company, with seven employees, has sold more than 2,000 bee homes thus far to owners in Switzerland, Ruetz said.

But it hopes to expand its operation to other European countries, he said.

Although the bees won’t be ready until spring, Wildbiene + Partner offers gift certificates and sells bee homes year round.

For anyone in the Zurich area, the company is staffing a booth at the Christmas market (Weihnachtsdorf).