Home News Life “$900 000 for a Eurovision trophy is a lot, yet it’s only one part of the contribution for Ukraine’s victory,” – Volodymyr Nosov, WhiteBIT

The WhiteBIT cryptocurrency exchange purchases the Eurovision-2022 crystal microphone trophy won by Kalush Orchestra for $ 900,000: funds will proceed to help the Armed Forces of Ukraine. 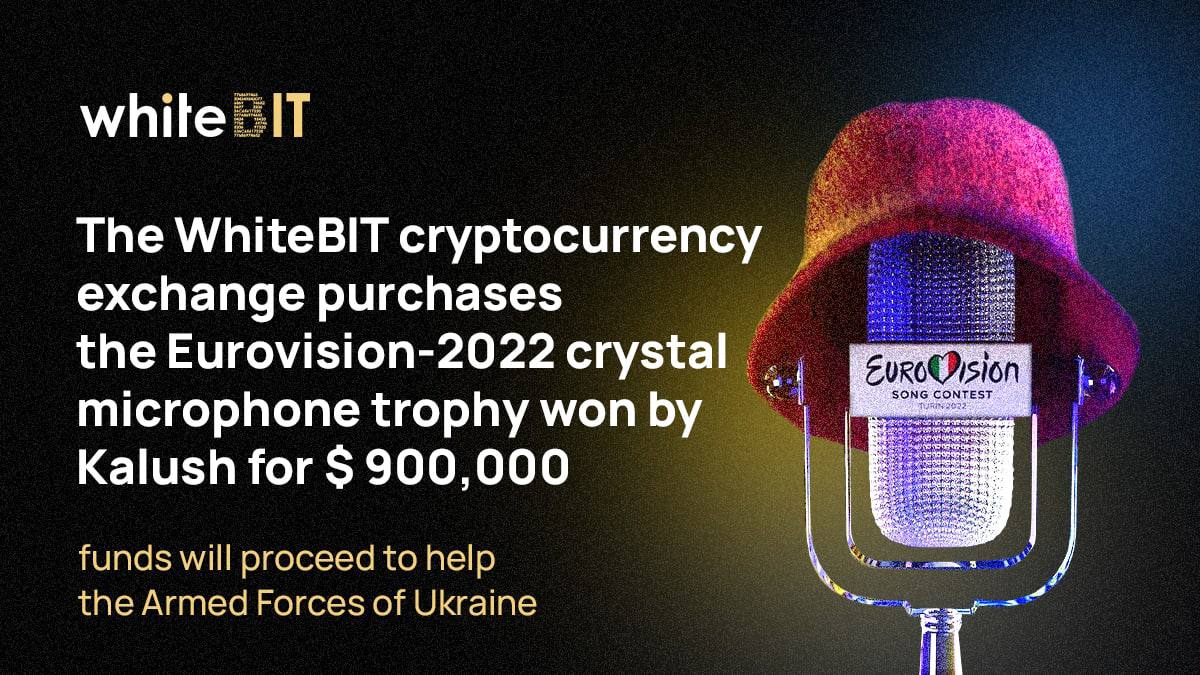 Europe’s largest cryptocurrency exchange, WhiteBIT won the auction aimed for the needs of the Armed Forces of Ukraine. The auction was launched by Kalush Orchestra, the winner of the Eurovision-2022 song contest.

The auction for the crystal microphone of the winner of Eurovision 2022 was held on the MetaHistory platform. In the last minutes of the auction, a struggle broke out between the cryptocurrencies of businessmen from Kalush, a charity fund from Washington and the Ukrainian cryptocurrency exchange WhiteBIT.

The Eurovision-2022 crystal microphone was sold for $900,000. Proceeds will be donated to the charity fund belonging to showman and volunteer Serhiy Prytula. The funds will be forwarded for purchasing an aerial complex of PD-2 drones for the Ukrainian army.

“WhiteBIT is grateful to the global community for supporting our country during this difficult time. As Ukrainians, we want our Western partners to know that Ukrainian businesses and entrepreneurs are also investing all their resources to maintain the fighting ability of our brave soldiers. The decision to donate in this auction, organized by the Kalush Orchestra, was completely conscious and thought-through. Indeed, $900,000, even for a crystal microphone, is a lot. But $900,000 to help the Armed Forces is only a small portion of the full contribution of all Ukrainians towards our common victory,” – said Volodymyr Nosov, CEO of WhiteBIT

It should be noted that at the end of March, WhiteBIT already took part in a charity auction that was selling the gold Paralympic medal, which was won by Ukrainian athlete Serhiy Yemelyanov at the Paralympic Games in Tokyo 2020. The cryptocurrency exchange bought the medal for UAH 900,000, which was used for the needs of the Ukrainian military: armor, athermal imager and a car.

Overall, WhiteBIT has been systematically contributing to Ukraine’s victory for more than three months. Since the beginning of the large-scale invasion, the cryptocurrency exchange has donated $4 million to help Ukrainians affected by the war.

Despite the fact that a third of Ukraine’s economy has stopped operating due to the war, the entrepreneurial spirit of the Ukrainian people cannot be broken. Therefore, the WhiteBIT cryptocurrency exchange not only continues its work, but also creates new jobs and expands its horizons around the world. We are proud to be Ukrainian and be an example of courage, bravery and perseverance to the whole world. Volodymyr Nosov

WhiteBIT is also working closely with the Ukrainian Ministry of Foreign Affairs. Comprehensive organizational support and assistance for the consular service of Ukraine has already been provided in countries where the cryptocurrency exchange has its offices. In addition, WhiteBIT aids the Anti-Crisis Center of the Ministry of Foreign Affairs and the call center, which provides advice to Ukrainian citizens 24/7.

Info: WhiteBIT is Europe’s largest cryptocurrency exchange. It meets all KYC and AML requirements and it is among the top 2 security exchanges in the world based on an independent Hacken audit. It also holds an AAA rating.