2B4CH, a Swiss non-profit think tank, launches an initiative to make Bitcoin one of the country’s reserve assets. They want to force this through a referendum. If you manage to collect more than 100 000 signatures in Switzerland on a subject on which citizens have to express their views, you force a referendum.

Not unimportant: these must be Swiss citizens in a country with 8.6 million inhabitants. Once that succeeds, it does not mean that your plan will be implemented immediately. The federal government usually has 12 months to give its opinion.

The initiators want the Central Bank of the mountain state to keep bitcoin as one of its reserve assets alongside gold.

“If we achieve the 100,000 signatures, then a parliamentary referendum will have to take place. And even if it does not come to that, the subject is on the public agenda”.

In Bennaim’s eyes, bitcoin is the best and most secure reserve asset there is, more solid than precious metals.

‘If one chooses to add bitcoin, it would affect people in Switzerland in the same way as the arrival of Silicon Valley and the London Stock Exchange have affected their countries economically and socially’.

In other words: bitcoin adoption as an opportunity to distinguish you as a country. See for example El Salvador that has adopted bitcoin as legal tender. In the coming months, the think tank will cause the necessary turmoil on social media and give public presentations to influence public opinion.

2B4CH was founded in 2017 in Geneva, a non-profit organization that investigates how bitcoin (and blockchain technology) can change society for the better.

The think tank has less than twenty members and does not accept donations. Switzerland is known as one of the most bitcoin-friendly countries in the world, with the canton of Zug testing bitcoin payments for government services as early as 2016.

Last month, the regulator approved a first crypto index fund, which is traded on the SIX Swiss Exchange.

Nestlé comes up with its own biodegradable coffee cups

The Swiss coffee producer Nespresso, part of Food Group Nestlé, will market its own biodeg… 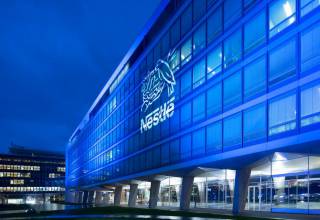 The Swiss coffee producer Nespresso, part of Food Group Nestlé, will market its own …