Five parties would be elected to the new Ukrainian parliament in the event of a snap parliamentary election. This is stated in a study conducted by the international research center BURI-Ukraine (The Belgium-Ukraine Research Institute, Belgium) during 24-28 September 2021.

According to the results of the survey, the respondents’ answers to the question “How would you vote if the elections to the Verkhovna Rada of Ukraine were held this Sunday?” were distributed as follows: “Servant of the People” – 22.1%, “Opposition Platform – For Life” – 19.4%, “European Solidarity” – 18.6%, “Batkivschyna” Party – 12.2%, “Syla I Chest” Party – 5.1% (among those who will take part in the voting and have decided on their choice).

How would you vote if elections to the Verkhovna Rada of Ukraine were held this Sunday?

The head of the World Health Organization has said that a new wave of pandemic coronavirus will start in the world in early autumn. In your opinion, is the Ukrainian government ready for it?

At the end of last year, Ukraine had an opportunity to organize production of the Sputnik V vaccine at a plant in Kharkiv. In your opinion, did the Ukrainian authorities do the right thing by refusing such an offer?

Assessing Ukrainian President Volodymyr Zelensky’s recent visit to the USA, the majority of respondents (72.3 percent) said that it would not have any practical benefits for Ukraine. 16.4 percent disagreed with this statement. Also, 65.8% of the respondents saw the results of such a visit as a loss for the Ukrainian diplomacy, and only 18.4% called it a “victory”.

In early September, Ukrainian President Volodymyr Zelenskyy held a number of meetings in the USA and met US President Joe Biden. In your opinion, will this visit have practical benefits for Ukraine?

Results of Zelenskyy’s visit to the USA – is this a victory or a loss for Ukrainian diplomacy?

In the questions regarding the closure of the Ukrainian media, there has been a gradual increase in the number of respondents who do not support the termination of broadcasting of TV channels “Newsone”, “ZIK” and “112 Ukraine”, as well as online-media “Strana.ua” and “Shary.net”. Compared to the previous survey, the share of such answers has increased from 44.5% to 48.6%. Also, a greater number of respondents agreed that the closure of these media will lead to the deterioration of the reputation of the Ukrainian authorities in the world (growth from 55.2 to 57.7 percent).

How do you personally feel about the closure of the opposition TV channels “Newsone”, “ZIK” and “112 Ukraine”, as well as websites “Strana.ua” and “Shariy.net”?

The UN Human Rights Monitoring Mission, the OSCE Representative on Freedom of the Media, members of the European Parliament and the leading organization for protecting journalists’ rights Freedom House have criticized the closure of the TV channels Newsone, ZIK, 112 Ukraine and First Independent, as well as websites Strana.ua and Sharyy.net. In your opinion, how will this decision affect the reputation of the Ukrainian authorities in the world?

The following trends were recorded in the answers to the questions about the case of Viktor Medvedchuk, the head of the “Oposition Bloc – Za Zhittya” political council: compared to the previous survey, the poll saw the increase in the number of respondents who believe that the persecution of Viktor Medvedchuk by the authorities is an attempt to distract attention from real problems in economy and social sphere (further growth from 42.8% to 47.2%) or a crackdown on his political opponent, who can be a main rival for the president in elections (growth from 21.4% to 22.1%).

In your opinion, the persecution of Viktor Medvedchuk by the authorities (including the choice of preventive measure and denial of appeal) is: 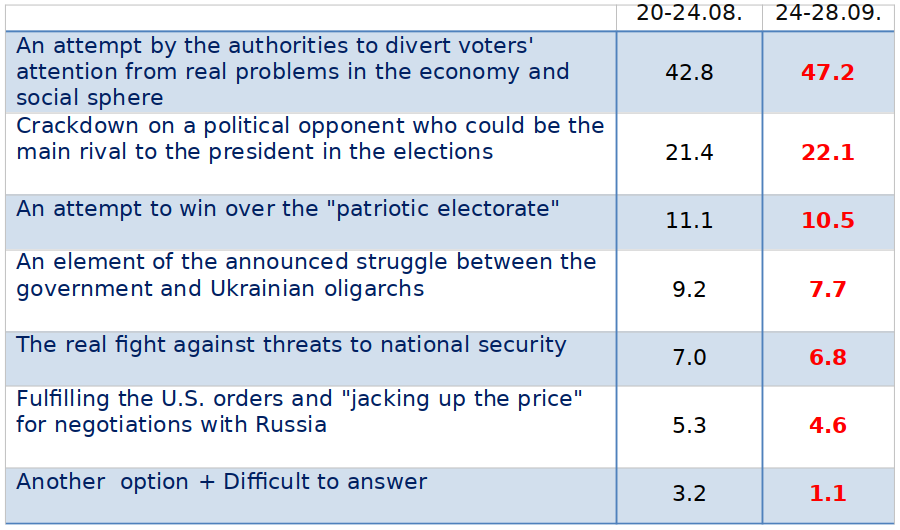 61.6% of respondents believe that the most fair outcome of the trial of Viktor Medvedchuk will be the recognition of his innocence and restoration of all his rights (an increase from 60.4% to 61.6%).

What outcome of the trial in the case of Viktor Medvedchuk do you consider the fairest?

The survey was conducted on the whole territory of Ukraine, except for temporarily uncontrolled areas of Donetsk and Luhansk regions and Crimea, by the international research centre BURI- Ukraine (The Belgium-Ukraine Research Institute, Belgium) during 24-28 September 2021. The survey method was telephone interviews based on random sampling of mobile numbers. Total number of respondents – 2,008 persons. Probable margin of error – 2.2%.