The Swiss city of Geneva remains a “hotspot for international espionage” and the number of Russian agents operating there is likely to increase further, according to Swiss intelligence.

The Swiss Federal Intelligence Agency (FIS), in its annual report published on Monday, has outlined a slew of threats, including violent Islamic extremism, cyberattacks, and a highly polarized world between autocracies and democracies. In doing so, the service specifically refers to the growing deadlock between the United States and China.

But a great emphasis in the report was placed on the war in Ukraine. As Russian intelligence officers, often deployed under diplomatic cover, are expelled from various European countries, there is a weakening of Russian spy services in those countries.

That weakening, however, could lead Moscow to reposition its agents in other, surrounding countries, such as Switzerland. In particular, the intelligence service pointed to Geneva, where many international institutions, NGOs, think tanks, research institutes, financiers, commodity traders and United Nations departments are located. The city could potentially become an” espionage hotspot”.

The city would be the “ideal working environment” for intelligence officers, who work undercover and want to easily come into contact with a large number of potential targets.

“We know that several dozen officers are operating in the city, under the guise of diplomatic and consular missions of Russia. Espionage is an ever-present phenomenon and will only continue to increase,” the report said.

The FIS urged the Swiss authorities to be vigilant and that “the tools available to prevent the entry of such officials should be used to the fullest”. Four years ago, the FIS said it suspected one in four Russian diplomats of being secret spies.
Acidified stresses

Relations between traditionally neutral Switzerland and Russia have soured in recent months, after the Alpine state decided to join the European Union’s sanctions in February. The country did so in response to Vladimir Putin’s invasion of Ukraine.

The war in eastern Europe has also brought about a historic turnaround for Switzerland. “We are witnessing a turning point that has shaken the foundations of the security framework in Europe. Switzerland (which has traditionally touted its neutrality, Ed.) has shown a clear commitment to the Western ‘community of values’ with its response to the war,” wrote Viola Amherd, who heads the Swiss defence department in the foreword to the report.

Swiss President Ignazio Cassis said in May that the decision to approve the sanctions against Russia does not mean that the country has lost its credibility as a neutral political center. Rather, it shows “which moral values we uphold and where we draw the line,” said the federal president.

In addition, the Ministry of Defense is currently working on a report, which reflects on joint exercises with NATO countries. Now that the Russian threat to Europe is plausible, the Alpine country may take a different diplomatic path.

In May, Switzerland imported 3.1 tons of Russian gold worth $ 200 million. The gold would account for 2 to 3 percent of the country’s total gold imports, according to data from customs.

Shortly after the invasion of Ukraine, Poland expelled 45 Russians from the country, while Ireland, the Netherlands, Belgium and the Czech Republic threw out 43 Russian embassy employees in a joint action. Many other countries have followed suit and, according to some media, the number of evictions is in the hundreds.

Credit Suisse declared guilty in AML case, got away with rather symbolic fine

According to the judge, Credit Suisse did not do enough to prevent a rogue client from lau… 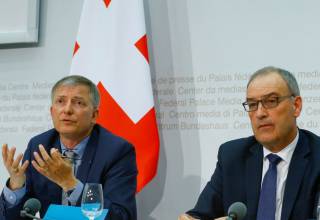