Do you now have Lunch during your winter sports in Italy or Switzerland? The mountain hut Rifugio Guide del Cervino, located in Zermatt/Breuil-Cervinia, has been slowly moving from one country to another since its opening in 1984. Due to the melting of the glacier, the border line shifts bit by bit between the two countries. The mountain hut is located exactly on this border, but changing the location of the hut entails all sorts of consequences. How this can be done and what needs to be changed, you can read below.

The border between Italy and Switzerland 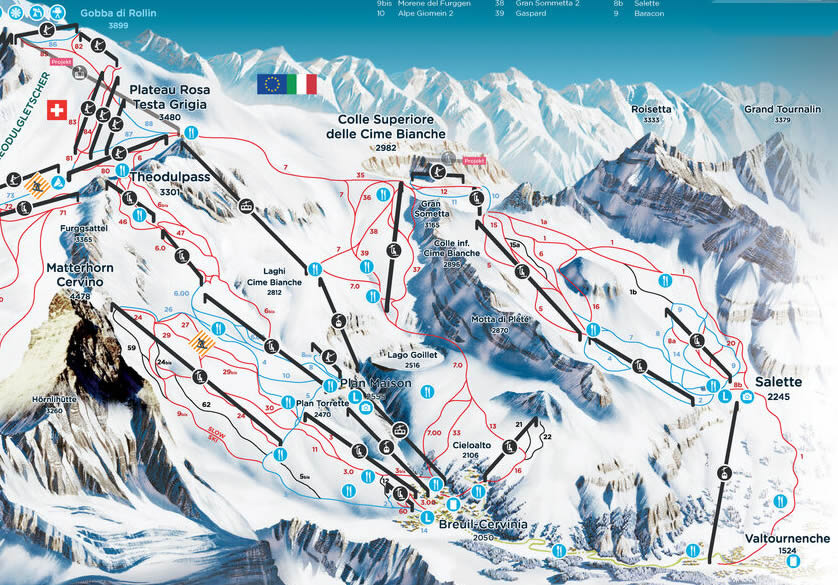 The Alps, of course, stretch across several countries, and somewhere in the old days a separation had to be determined. This is done using the water separation line. This determines by means of how the water drains (north or south) where Which country ends and the next begins. In other words, where exactly is the border between the Alpine countries. However, due to the melting of the glaciers, this watershed is constantly in motion. This mobile boundary line is measured every few years. Treaties have also been drawn up between Austria, Italy and Switzerland to distribute the border areas fairly every few years.

The changing boundary line has little effect in the Alps because not much has been built on top of the peaks. This is only the case for the mountain hut Rifugio Guide del Cervino, one of the highest mountain huts in the Alps. The Rifugio is both a restaurant and a sleeping place and is located at 3480 meters altitude on Plateau Rosa in the Zermatt/Breuil-Cervinia ski area. Here lies exactly this dividing line between Switzerland and Italy.

At this point, you can actually ski in both countries. On one side you come from Switzerland and on the other side you go down the mountain into Italy. So you can choose between the more challenging slopes in Zermatt and the friendlier slopes in Breuil-Cervinia. Next winter, World Cup competitions will even be organized for the first time in this Swiss-Italian ski resort. This cross-border World Cup competition in Zermatt and Breuil-Cervinia together will be a first!

When the mountain hut opened in 1984, the entire building was in Italy, but since recent years, two thirds of the hut is now in Switzerland. The cause of this is climate change, because the melting of the adjacent Theodul glacier causes changes in the aforementioned watershed. However, this has consequences for Rifugio Guide del Cervino. As soon as the hut changes country, it will have to comply with all the laws and regulations of Switzerland. Even the currency will have to change from euro to Swiss franc! This creates discussion between both countries. The Italians do not agree.…

This discussion has been going on since 2018 and since then Switzerland and Italy have been in talks to solve this problem. In 2021, the two countries reached a decision, but it will not be made public until 2023. So it remains to be seen what the outcome will be…

About the author: Damien Karlström

The editor-in-chief worked for many years as a literary editor in Bern's leading publications. Over time, I decided to become the editor-in-chief. The main direction of materials is international relations and society.