As a result of climate change, the landscape of the Swiss Plateau is becoming increasingly similar to that of the Italian region of Tuscany, warns the Swiss foundation for landscape protection (FP). The foundation points out the consequences of this ‘toscanisation’ for the tourist capital of the landscape.

The ever longer periods of heat and drought over the past twenty years are already changing the landscape significantly. Water loss is dominant in many places. Green and coolness therefore prevail less and less often. They give way to the bright shades of yellow and brown, reminiscent of the arid landscapes of the Tuscan valleys, writes the foundation.

In the Alps, at high altitudes especially, the consequences of climate change are also evident, but in a different way. There is an increasing “mineralisation”, says FP in a press release, referring to the process by which organic compounds are converted into inorganic ones. Glaciers retreat there, which is fraught with drought. With a lack of water, the exposed moraines green very slowly. Mountain streams and waterfalls of non-glacial basins turn into streams. This is also a situation that is well known in Italy, in the Alps of Piedmont and Liguria, says the foundation.

According to the foundation, the loss of water and increasing warming have an impact on biodiversity and reduce the variety of landscapes. That situation also reduces the recreational value and thus the tourist capital of the landscape. The foundation regrets that “the romantic ideal of a ‘green’ and water – rich Switzerland – model for many ‘Swiss’ in other countries-seems to change sustainably”.

What started as a joke grew into full-blown comedy: Swiss-Italian melting border

Do you now have Lunch during your winter sports in Italy or Switzerland? The mountain hut … 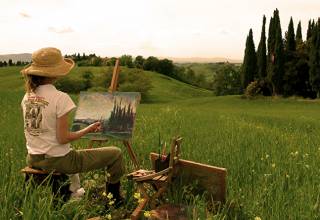 As a result of climate change, the landscape of the Swiss Plateau is becoming …